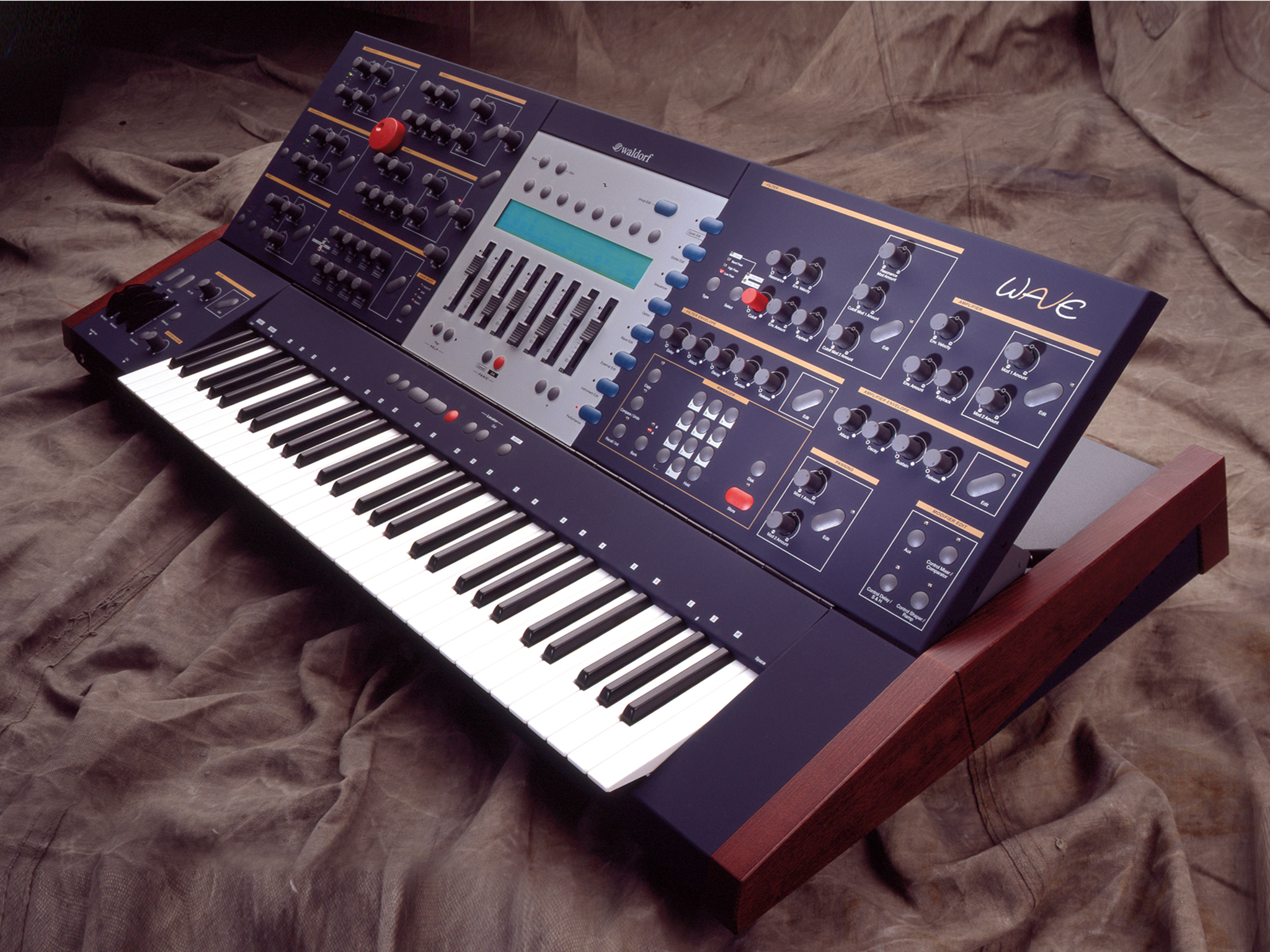 After almost 30 years, the Wave remains one of the most important synthesizer designs for me, one which I was allowed to fully develop in terms of design. As a comparatively small manufacturer, Waldorf was brought to its financial knees by pursuing such a big project to completion. I remember that Wolfgang Düren's main goal with the Wave was to use the large number of ASICs (Application-Specific Integrated Circuits) he had bought for Microwave manufacturing. It is important to note here that creating a specific ASIC — in Waldorf’s case, a chip that accommodates the magic of wavetable synthesis in a compact, interference-immune unit — is a high initial investment. Having purchased such a large quantity of ASICs, Wolfgang was worried that those wavetable chips could not be used up by selling Microwaves alone, but did not foresee the megalomania that surrounded the company when the Wave project finally saw the light of day.

When the Wave team — comprising Andreas Busse (software and ASIC Design), Claudius Brüse (concept and absolute synth nerd), Frank Schneider and Thomas Kircher (hardware), and yours truly (product design and absolute synth nerd) — started the project, synthesizers with such a luxurious haptic user interface were far from hip since 19-inch rack-mounting modules controlled via MIDI keyboards were the studio standard at that time. That said, we could already sense a growing dissatisfaction with so-called menu-driven sound manipulation amongst the musical masses, which was, admittedly, a far from direct approach. As an advanced modular wavetable synthesizer, the Wave was to be equipped with a comprehensive control panel like no other.

Once Claudius had developed the basic concept for all the modules needed to create the Wave, we both started to work on distributing them sensibly — strictly according to the signal flow — on a surface. Suffice it to say, that surface area gradually increased in size so that the resultant panel soon took on Oberheim Matrix 12-like proportions — even expanding slightly beyond it, in fact! Indeed, bigger, we both found, worked better. And hinged to tilt — just like the Minimoog Model D. We liked that, too.

Frank built up a functional prototype, backed by the first circuit boards and associated potentiometers and buttons, so that we were able to test and perfect our concept over a long period of time.

The Wave was presented and perceived as a contemporary superlative synthesizer when making its first public appearance at Frankfurt’s famed Musikmesse — Europe’s biggest trade fair for the music industry, musical instruments, and music education — in 1992. Needless to say, no detail of this instrument was left unshaped, either in its appearance, position, or technical execution. Taking centre stage in its expansive control panel, the central control unit is completely behind Plexiglass. Since the Wave is eight-part multitimbral, there are eight faders directly below the wide LCD and eight buttons directly above it. Its operating mode is preselected via one of eight large horizontal buttons located exactly on the dividing line between the central control unit and the synthesizer surface.

The colour scheme, materials, and product graphics correspond to the corporate design created for the Microwave. As a spot colour, a warm orange, complementing the basic colour, seemed more appropriate for this large instrument than the turquoise blue of the Microwave. Controls are ideally ergonomically spaced, so can always be operated without conflict. Central functions — for selection of the wavetable and filter cutoff, as well as the buttons for confirmation, store, and record — are all highlighted with red control elements. Indigo blue is used as an additional colour for those eight operating mode buttons.

Each module features a 45° inclined Edit button which, when pressed, makes available all secondary instrument functions via the central display unit. The inclined position of those buttons visually convey a ‘slash’ symbol.

The design of the instrument housing exhibits a high degree of solidity due to the considerable space required for the internal technology. The 61-key Fatar TP8 keyboard nestles between ergonomically optimally inclined end blocks and visually stands slightly above the front edge of the device. The operating panel rests with a slight inclination directly behind it and can be manually brought to an optimum working angle with the aid of second-gas pressure springs. The panel itself is kept as slim as possible and is flanked laterally by solid wooden cheeks made of dark cherry wood when at rest.

All visible parts of the housing are painted with an ultra-matt, dark blue coating. The colour tone has been specially produced for all Waldorf products. The central stone-grey Plexiglas cover features an anti-reflective coating.

Since the front panel comprises several parts, it was a major manufacturing challenge. Due to the high side profile of the unit, simple wooden side panels looked too clumsy. By segmentation and the use of a metal panel to the rear, an appealing lateral view of the instrument could be achieved — all the more so with the panel at rest, resulting in the Wave becoming comparatively slim in appearance.

As is the case with all my designs, I carefully considered the interaction of physical elements and product graphics from the very first sketches. The optical balance is always more important to me than the absolute correspondence of vertical and horizontal centres of the control elements to each other. With the Wave, the upper-right corner of the panel was intended for the logo from the outset. 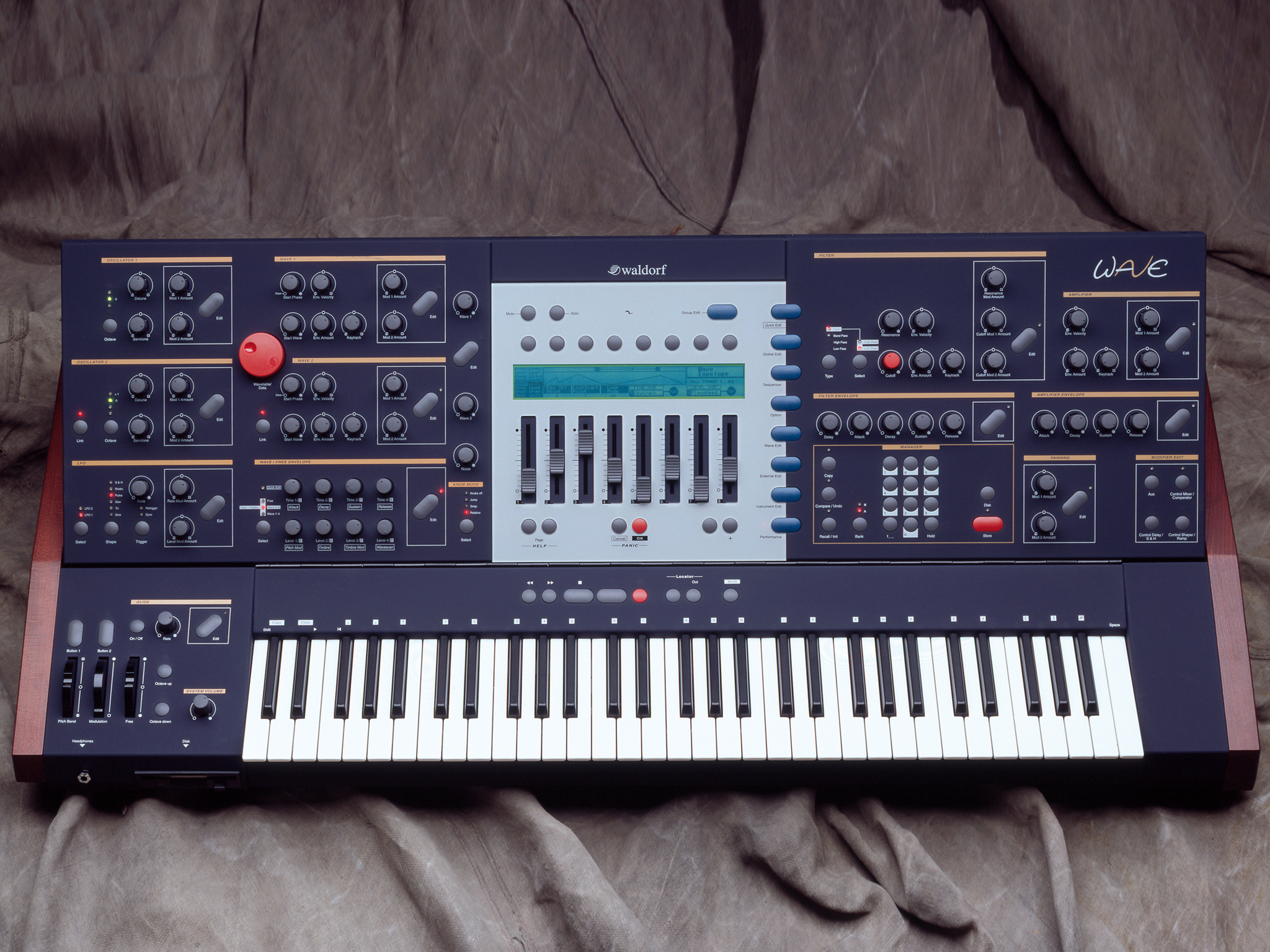 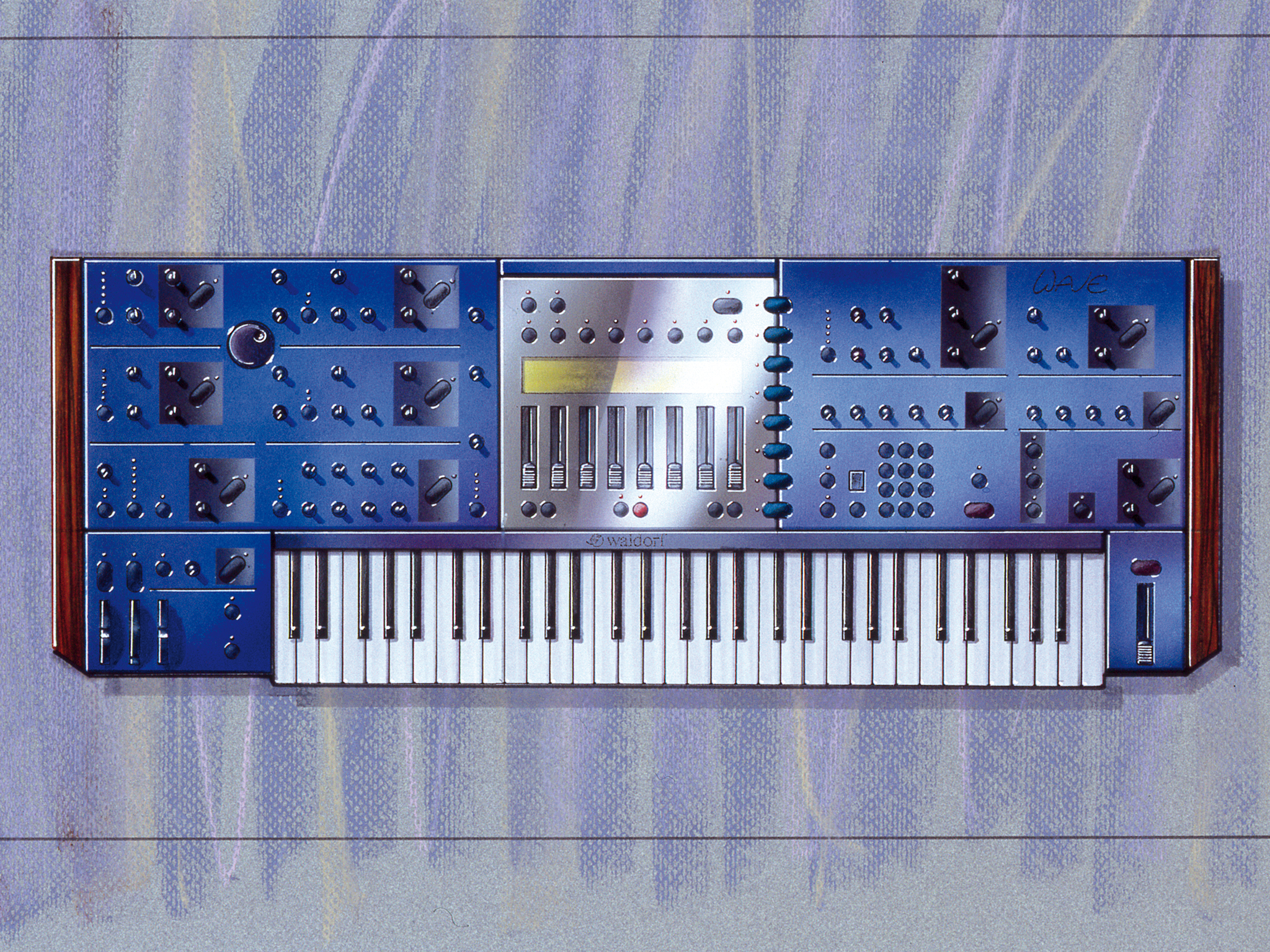 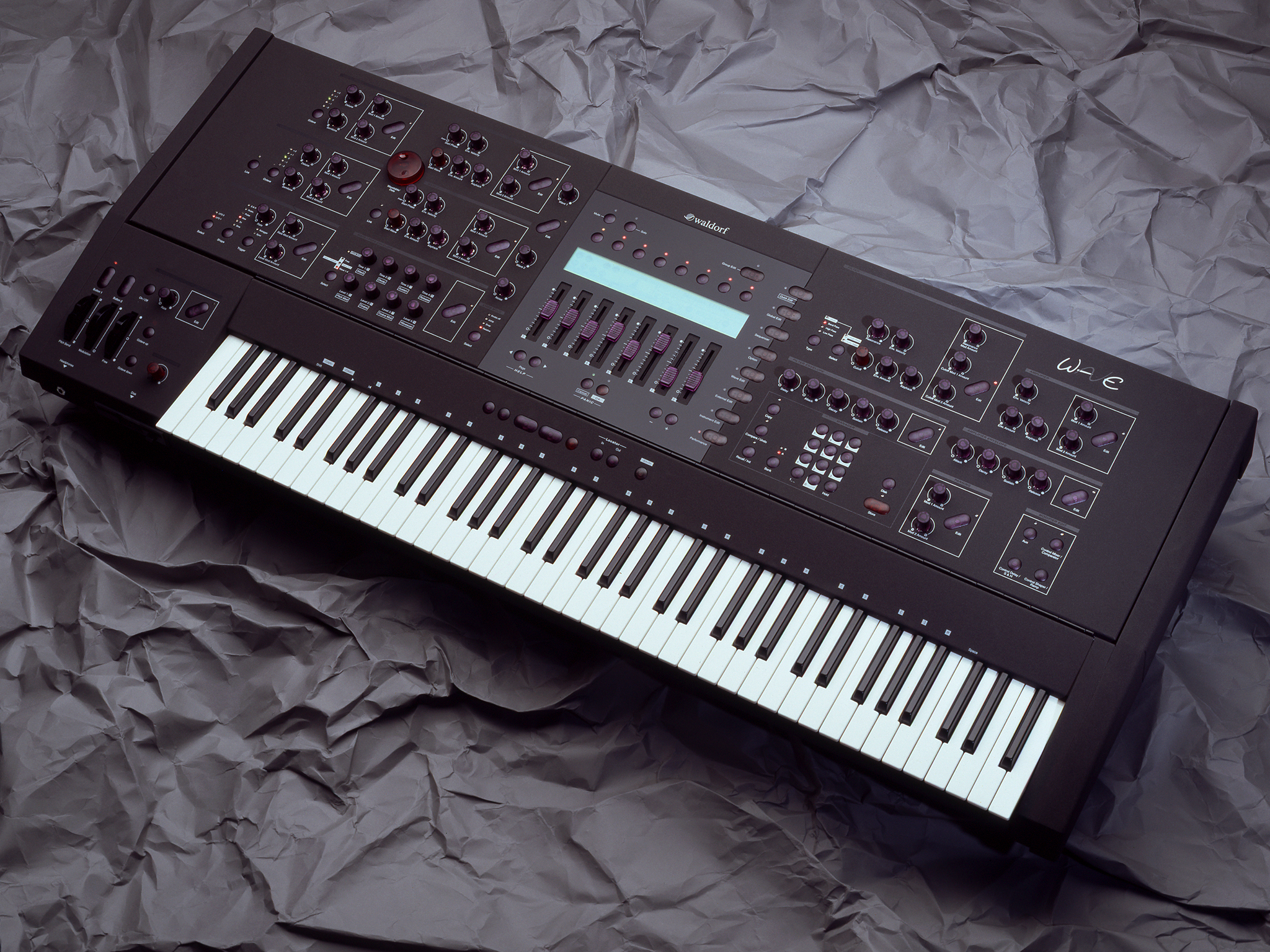